There is no life without a song 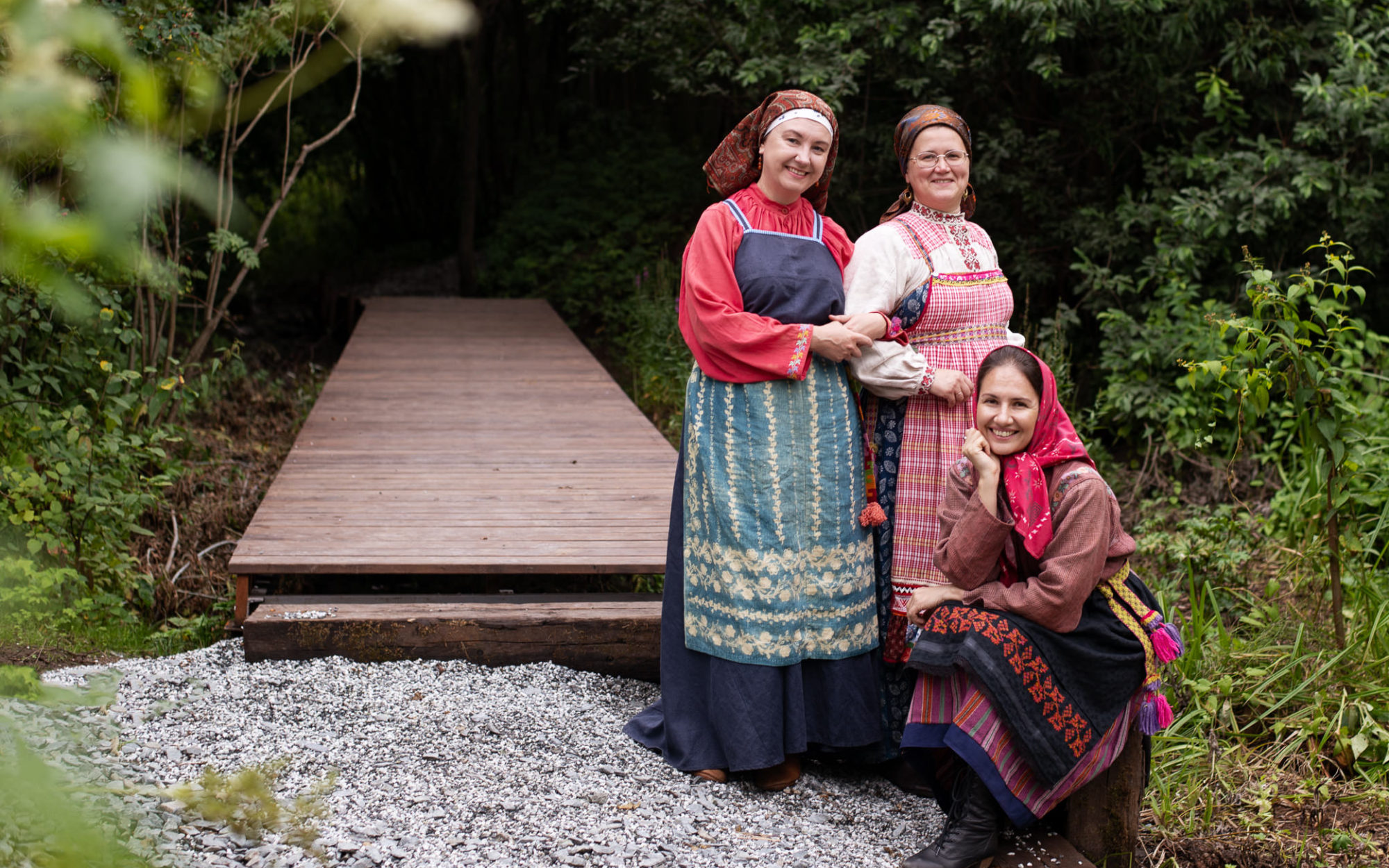 The ensemble «Trigolos» was formed in 2015. Irina Pyzhyanova is an ethno-musician, a performer of folklore music, music of the Middle Ages and the Renaissance. Marina Krysova is a folk master, a specialist in traditional textiles. Marina Sukhanova is the secretary of the art expert council on folk arts at the Ministry of Culture of the Perm Krai, the expert in the field of traditional culture and festival movement in the Perm Krai.

The repertoire of the group is formed from the 1990-2010 expeditionary records of the participants and is supplemented from published archival sources. The ensemble is the 2018 winner of the competition for the ethnomusic award «MIRA» of the International Festival of Ethnic Music and Crafts «WORLD OF SIBERIA» in the nomination «Ensemble of small form»; nominee for the award in ethnic music of the Russian World Music Awards (2017), finalist of the All-Russian festival-contest «Music of the Earth» (2017).

Marina Sukhanova: I was born in Perm. Both my grandmothers sang. We are from the generation «under the table,» when we listened to all the trinklieds, giggled, sometimes got out, got up on the chair and performed ourselves. In those years, of course, it was no thought at all that traditional culture would be a matter of life. At the age of 15, I came to sing completely different songs to the Palace of Pioneers in the Working Song ensemble directed by Igor G. Noskov. I didn't get into the main line-up, there was a long work upon my vocals, and then I heard the folklore studio of the ensemble warming up their voices, and this manner became for me an astonishment and the key to music.

Marina Krysova: I remember from my childhood how people gathered around the table and sang, at least in two voices. I also sang romances with grandmothers, and then in the 90s one of the subjects in school was folklore. I liked it so much that I went to study in the folklore ensemble at the University «Peselnaya Artel.»

Irina Pyzhyanova: I was born and raised in Perm. I spent a lot of time with my mother, she sang songs of the Soviet time with me. We go to the shop — we sing; we go back — and sing again. Then I went to study at a music school, and my teacher Lyudmila V. Maltseva, the head of the folk ensemble «Rodnichki,» invited me to join them. And since then without a song, I have no life.

Marina Sukhanova and Marina Krysova: We met together in 1995 at the «Peselnaya Artel.» But we never thought that we would sing with Irina, especially when the history of experimental projects began — the Voronovo Krylo ensemble and the Drevo folklore studio, which Irina managed and thus developed the ethnofuturistic theme. We thought that this approach is not our way; we sing «tradition.» But we all worked in the House of Folk Art, and after the Drevo project was finished, Irina unexpectedly addressed us. At first, we were surprised, but we decided to try to sing in three, especially since we didn't have any actively working project then.

Irina Pyzhyanova: I am very interested in them, my colleagues have their own expeditionary experience. It is challenging to preserve identity in the diversity of the modern world; even doing projects in the field of ethnic music, it is effortless to forget how the songs sounded initially. For me it is essential to return to the authentic sound, that's why I began to sing in this group.

For a long time, we thought out the name. «Two Marina and Irina called themselves Catherina» was such an option. Katya is a kind of a female denominative, in the south of Russia Marina is a such one, somewhere it is Dunya, and there are a lot of songs about Katya in Perm Krai. At one time we even wanted to make a program about Katyas. There were many variants of the name of our trio, but they were all forgotten: we invented them, and we laughed at them. We envy the Komi-Permyaks: they can name themselves like «Blue Flower» or «Clear Dawn,» and in the Komi-Permyak, it sounds good and unusual. And we have either pathos or some kind of crap. Our name was also somehow suggested by the Komi-Permyaks: I remembered the dance, «there the girls walked, they played well, with a three-voiced forest.» There are three of us, and that's why we are playing three-voiced.

We have a rich festival life. Last year, we went to the international ethnic festival «Kukushka,» to the festival «Music of the Earth» in Moscow, we traditionally perform in Yekaterinburg at the festival «Dimitriev Day,» and this year we also attended the largest festival of ethnic music in Russia «World of Siberia.» Now we have a fantastic project with the JazzAeterna ensemble. We perform many songs from the Russian South and from Central Russia, where the ritual songs of the spring and summer cycle have been preserved. Perm region is deficient in calendar tradition but is rich in round dances and lyrics. We are now trying to make an extensive collection of the round dance traditions of the Perm Region, we work in the studio for over a year now.

We travel around Perm Krai quite a lot, this part of the activity is connected with the Perm House of Folk Art, where we rehearse. These are exciting trips: except speeches, lectures, meetings, this is also a form of expeditionary activity. In many places of the region the talk, psychology, customs of hospitality are preserved — even if the song is gone, the life that surrounded this song has remained around.