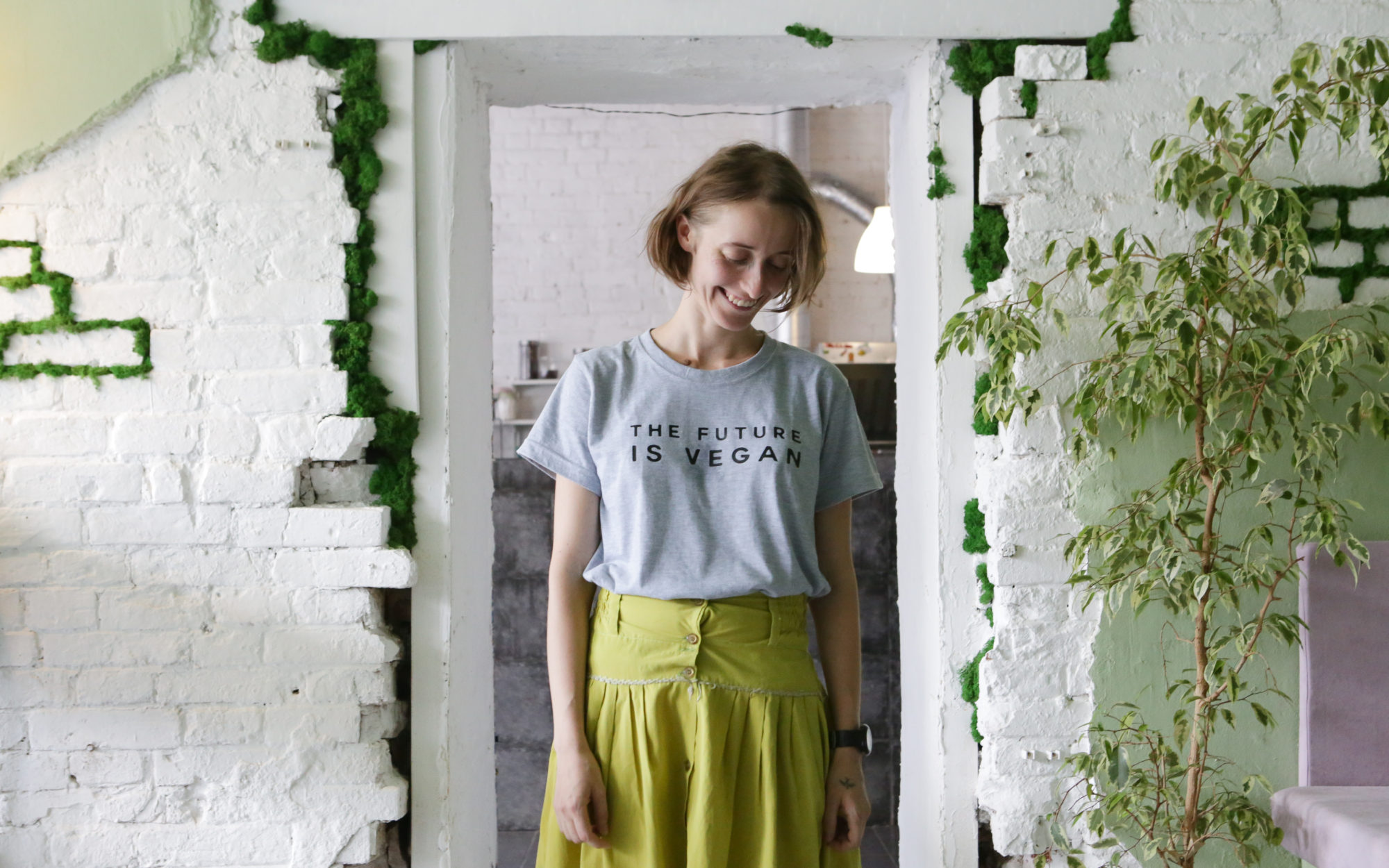 Born and lives all her life in Perm. She graduated from the Higher School of Economics in Perm with a bachelor's degree in economics. She is actively involved in social activities, including projects for the protection of animals and the popularization of vegetarianism. Since 2018, director of the public organization «Society for the Development of Productive Initiatives.» Among the organization's main ongoing projects, there is «Timeout Territory» — a day centre for people in need.

I always lived in Perm, was a modest, shy child. It's still difficult for me to enter new places that I've never been to before. As a child, I dreamed of becoming a doctor and working for the organization Doctors Without Borders (a humanitarian association of doctors and nurses who help injured people in hot spots). I attended courses at the Medical Academy, but finally entered the Higher School of Economics. Around my second year there, I realized that I had had a different plan for life. At this time, social networks were appearing, which made communication easier for shy people. And I wrote on VKontakte page that I have children's stuff that I want to take to an orphanage. Suddenly 15 people answered, most of them I did not know before. People wanted not only to bring things, but to do something else useful. For me, this was a turning point: I realized that you can just gather and do something cool for free. We still communicate with some of the guys whom I met then.

We kept going to orphanages. At first we got very carried away, but later we realized that many people were already going to orphanages, and decided to help animal shelters. At that time in the newspapers they only wrote terrible notes that everything was bad in the shelters. We went to Fidelity, the oldest dog shelter in the city. They were really out of hands, so we became volunteers. The next two years, I worked very actively in Fidelity, and began to coordinate volunteers there. It was very important to me. At that time I almost stopped appearing at the university, I could leave a lecture to save some dog.

At the same time, my friend and I became vegetarians and joined the organization advocating for the protection of animals. And then it was time to write a diploma, thanks to which I didn't go anywhere for a month and a half, and I had time to think calmly. I realized that we do something every day, but nothing changes. You find home for one dog, they bring three. It was not clear how to change anything in this area. People get very tired of this work, become more aggressive towards each other, instead of becoming more humane. I decided to stop, also because I had many other ideas.

I dreamed that when I finish my graduate work, I will buy a garage and open a shop for homeless there. I began to read more about this and found out that people in the world are doing absolutely free fairs (Really Really Free Market). I liked the idea, so I wrote on social networks that I want to make such a fair, and at once there were three people ready to help. One of us (Sasha Klimova) had an old beautiful house for demolition in the centre of the city owned by her parents. Huge space. There our first fair happened. The result was a large-scale event that lasted three days and three nights. There were philosophical conversations at night, we sang songs...

After that we did about 25 more fairs in different formats. I really like this approach: we set the rules by which space works, and do it with a super-minimal budget. I always try to pack the event into some checklist, a training manual, so that everyone can understand how to make it themselves. And the free fair is also a very cool tool for the local community to stimulate interaction and the exchange of resources between residents.

Later on there were times of the cultural revolution when anyone could send an application and they told: «Cool idea, we will support you.» We came up with an idea to get and place 17 pianos in different places of the city so that people could freely play. People liked it. I remember the reviews: «while I was standing at the piano, three children touched the keys and asked to go to music school.» This is one of my favorite projects. At that time I realized that I was doing something interesting for the city. Within the framework of the White Nights Festival, we began to organize the Living Libraries. We realized that it is very cool when people meet other people — incomprehensible, dissimilar people — and can communicate.

After graduation, I did not know exactly what I would do, and went to work at the Center for Civil Analysis and Independent Research (GRANI). We did useful and interesting projects, but I did not feel very comfortable in the team: people in the organization were very different from me. Two years later, I left, and my friends and I opened the first vegan store in Perm — Veganbird. With a very small budget, it seems now, of 80,000 rubles — we added up our three salaries. The first store was located on 11 square meters. Three months later, we were able to rent a larger place. It was business, but the main mission was educational.

However, disadvantages of microbusiness always include the fact that even if you are tired, you still cannot delegate your duties. And at some point, the guys we started with, left. And I also realized that I did not have time for anything else, except for administrative matters. Plus, at that time, a large network of Lakshmi vegetarian grocery stores opened in the city. As a result, after about two years we closed. For a while, of course, there was a feeling of failure. But a year later I found myself finally doing a lot of interesting, amazing things again. Later, I again began to work as an expert with the GRANI Centre, sharing experience with novice volunteers, activists and non-profit projects.

As a child, because of being an introvert, I had my cat, Krisya, as my best friend. I told her all my secrets; we shared a special connection. The field of helping animals has always been close to me, I did not want to move very far from it. A few years ago we started doing an annual animal rights festival.

The thought that I jumped from topic to topic, from one interesting format to another, always tormented me. It was necessary to make a choice, to focus on something, and I decided that now in Perm it would be helping people in need. For two years, once a week we go to people with experience and risk of being homeless to two places in the city and make dinner. Social workers come with us, so that after dinner they can talk with a person and help him figure out his situation. Sometimes we are accompanied by doctors, psychologists, lawyers who consult people for free. Almost always we have clothes, medicines, and hygiene products with us. Our charity project is called «Timeout Territory».

Several restaurants cook food for dinners, and we buy the supplies with private donations. For the New Year, we collect gifts of useful items, sweets and tangerines.

Six months ago, we published the first Perm manual for a person in need. It was made entirely on a volunteer basis. There is our volunteer Denis who collects weekly vacancies for those who need part-time job to start with, or job with accommodation.

We try to make things beautiful: tablecloths with rabbits, flowers, warm string lights. Sometimes we bring games: checkers, chess. Although it seemed to me that a person in such a life situation is not up to games. But people are happy to play and are always looking forward to this.

In January 2018, I became the director of the public organization «Society for the Development of Productive Initiatives», and the «Timeout Territory» became one of the projects of our public organization. Gradually, we came up with the idea of creating a place where we can help people in a safe and calm environment. In November, we opened a day-care centre for people in need «Timeout Territory.» We won a presidential grant, funds were allocated for a year, but we hope that this project will become permanent. Now this is my main project, there are six people in the main team, another 20 come from time to time: social workers, students, doctors, lawyers, psychologists. Most of the work we do on a volunteer basis, but the day centre has a permanent staff of five assisting specialists.

I think it's our human responsibility to help people who ended up on the streets because of some unsuccessful situations. And I am glad that we have the strength and the ability to create a safety net in the city for people whose lives went sideways.