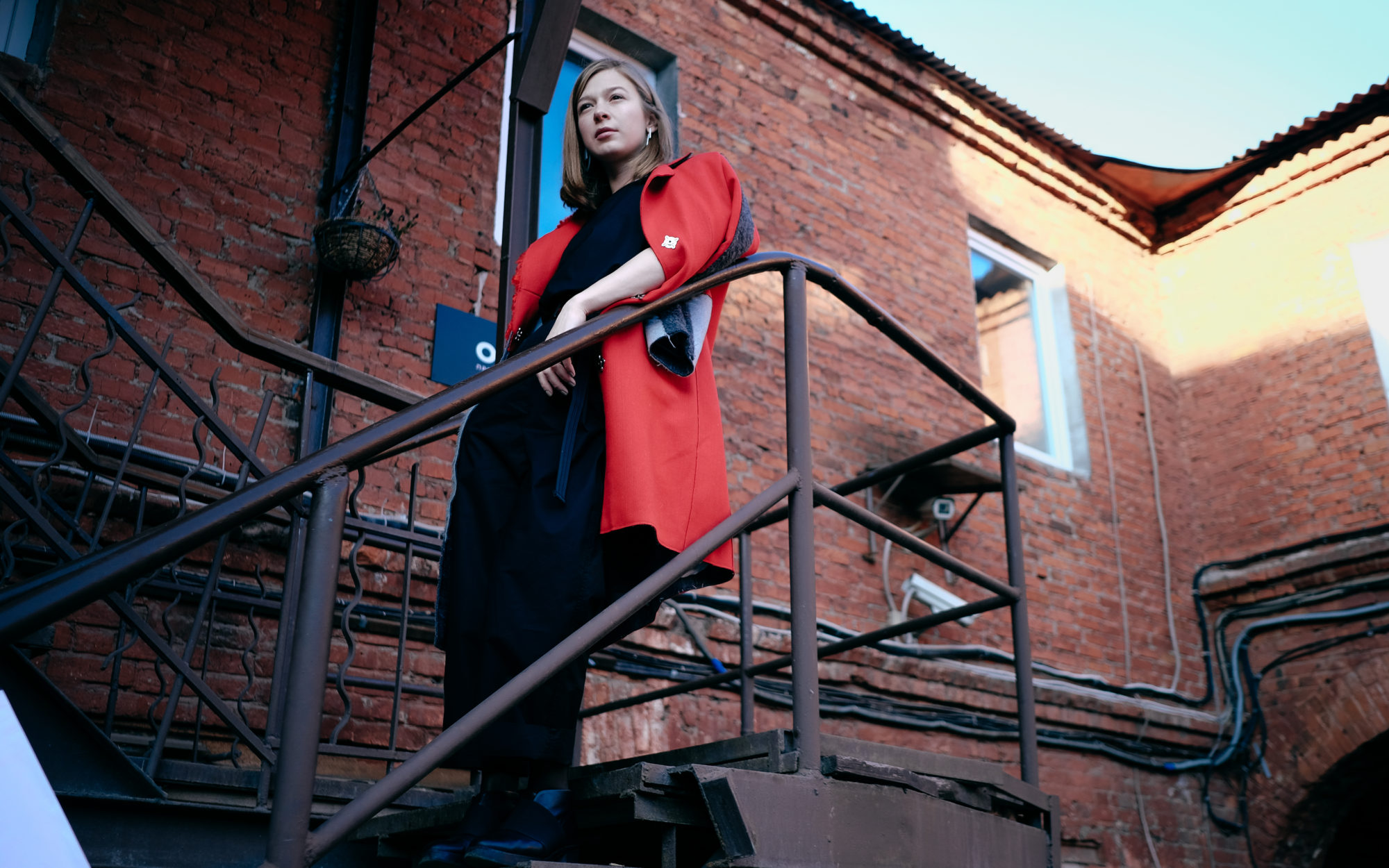 Born and currently works in Perm. Couturiere, fashion designer, mastermind and organizer of the Red Market. Coach of Russian national team in Fashion technology on the WorldSkills Championship.

I am from a wonderful Perm family. My mother is a designer, couturier and technologist; she studied in Germany and then opened a workshop and MIF school here, which was responsible for couturiers' education. I still do not completely understand what my father does — their company, which started from five people and turned into a huge team, is dealing with automatization of the large-scale industries. My grandmothers are teachers; we are, in fact, a family of teachers.

There was no choice of profession for me, to be honest, since I grew up on the fashion shows. However, no one taught me to sew; I watched and tried to copy. All my first clothes were handmade. Immediately after school, I went to Saint Petersburg. There was an option to go to Moscow, but I wholeheartedly wanted to go to Petersburg. I tried to enter Institute of Technology and Design, but was excluded from the history exam for cheating. It was a chance for another opportunity — to enter textile art design in the Institute of Culture and Arts. There was an amazing cast of tutors, many were from Mukhina Academy. In four years, I came back to Perm, gave birth to my son and continued studying in MIF as couturier.

At that point, I was working a lot for magazines, did photoshoots, and was a stylist. There were offers to pass my knowledge but my teachers' family couldn't let me teach without proper pedagogical education. Therefore, I went to college to study surdopedagogy. I was interested in it, even had grandeur dreams of an industry, which can involve hearing-impaired people. Sign language doesn't have barriers, I could have talked it everywhere I went but the learning process is very difficult, you have to devote your whole life to it. Maybe, I will come back to this idea.

At the end of 2010's design markets became extremely popular — Picnic Afisha in Moscow, Fashion Week in Kiev, Sunday Up Market in Yekaterinburg. My friend Alexandra Bukrina and I started going to them with my clothes and her accessories. And then we thought, why not to make the same event back at home? Our first try was called Gagarin-market: because in America weekend market are named after streets they are held in, and also because Gagarin was the first man in space, and we considered it symbolic. If we are accurate, market wasn't held exactly on Gagarin Boulevard, but in House of Culture Iskra. The team consisted of us two, our investor, and Alena Kobylyanskaya, marketologist by education. The first experience went well — we had guests from Moscow, Saint Petersburg, Perm designers arrived. Many people came for free, just to make a beautiful, bright and unusual event, to make a party. But then our team fell apart: we started sharing too different opinions with our investor. We went away, gave up name, and decided to start again.

In spring, we already did the first Red Market. If you remember it now — we moved the desks ourselves, there were no tables, no equipment, we even unloaded tracks ourselves... I was buying cables, knew exactly how many kilowatts we could use and how to set everything in... Soon we knew exactly who's responsible for what: Sasha was in charge of designers, I was responsible for food, Alena took care of education and entertainment. Global and organizational questions such as budget, agreements and so on, were traditionally my responsibility as well.

Everything was created at my kitchen. We wanted the name to be short and clear. Red is a day off, holiday, red day of the calendar...Also, my mother had a festival Red Dress and I wanted to follow that line.

I can now compare Red Market with a child that grew up so fast. It has been in the process of puberty for a year now, and I guess, is formed enough, yet we don't want to get stuck in the teen age. What shall we do? Shall we invite even more designers? But people stopped buying things, so Red Market now is more a food market, while for us the main mission is still to support local creators.

After Red Market, idea went to masses, and we became a team invited to make various events of the kind. For example, lately did house warming party for a building team: a party in the courtyard of the newly built house. Our photographer later said, «It is amazing: you come to Parkovyi district, enter the courtyard — and there is Red Market, the same atmosphere, the same music.»

When our event turned one year, we decided to make a party in a huge space of recently renovated House of Culture Iskra. It was cool: guys from SecretBar in 24 hours turned an impressively big shed into a rave location — huge stands from pallets, big projections on the walls, several bars, lounge zones, a stage...some people still can't forget that party. And the same guys at that time had a farmer food market. We thought what if we unite our designers and their farmers, invest in the music part together and make a summer event. Tried thinking on the new name but decided on the Red Fest as RED for us is Rave, Eat, Design. Red Fest is result of work of the Red Market and Farmer's Food Market represented by Kostya Nyashin and Anastasia Yakhnina. People who are responsible for the music part change: we had Sasha Moskotin, Masha Berber, now we are working with Vika Ikonnikova. There are people who understand about it more than we do. Together we discuss who we want to bring this time, how many resources we have. The team is growing.

Currently I am also coach of the Russian National team in Fashion Technology of the WorldSkills Championship. It is the world championship of various working professions, which is held once in two years since 1950's. Russia took part for the third time. I had many doubts whether I am even interested in such an activity, where there is plenty room for bureaucracy but very little for creativity. But globally I like the project's goal a lot — improvement of the quality of secondary special education in Russia. There are about 50 professions represented on the festival: they include builders, mechanics, and all beauty industry.

We had our first training in September 2016, currently there are two girls in the team. Recently they went to the European Championship where we won silver, and Russia became European champion in medals and points. On the world's level we were fifth out of thirty, which is also not bad, especially since we were competing with Chinese and Brazilians who work like machines. Coachwork goes on every month: we make tasks for competitors, prepare them for the upcoming championships, meet at this or that place in various cities of Russia. Competitive tasks can be different, for example, to make a technical drawing, make paper patterns, sew a dress with a lining in six hours. I teach design, so most of all I like EuroSkills, the world's most difficult genre «to fit as many technical tricks as you can in one model.»

I was always inspired on design by films and books: Boris Viand and his Froth of the Daydream, Bazhov's stories, Dolls by Takeshi Kitano. Now people have become my source of inspiration: their energy, emotions, thoughts, lifestyle, professionalism.